Celebrity Deathmatch is a claymation television show that depicts celebrities against each other in a wrestling ring, almost always ending in the loser's gruesome death. It was known for its excessive amount of blood used in every match and exaggerated physical injuries (e.g., one person cuts off a participant's foot, living through decapitations, impalement, etc.).The series was created by Eric Fogel; with the pilots airing on MTV on January 1 & 25 1998. The initial series ran from May 14, 1998 to October 20, 2002, and lasted for a 75-episode run. Professional wrestler Stone Cold Steve Austin gave voice to his animated form as the guest commentator. 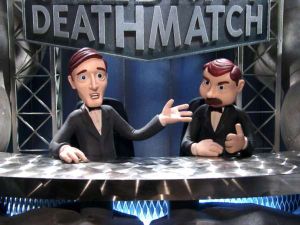 Want to see famous and infamous figures from the worlds of film, television, music and politics tear each other limb-from-limb? So do we! That's why we're huge fans of Celebrity Deathmatch, a clay-animated series featuring no-holds barred fantasy fights between members of the pampered set. It's the gnarliest, most over-the-top gorefest that's ever made it past broadcast censors.

Not only is Celebrity Deathmatch incomparably violent, it comes in huge doses! Each episode presents three full matches between clay renderings of the hottest and most notorious celebrities pitted against each other in the ring.

Celebrity Deathmatch also features all the pre-game and grizzly post-game activities of fight night, such as one-on-one interviews, press conferences and hilarious moments in the locker room. For those special moments, we rely on clay-faced celebrity death experts Johnny Gomez, Nick Diamond and Referee Mills Lane, as well as resident interviewer Tally Wong. Watch long enough and you may even have the great pleasure of seeing their limbs and faces ripped off. Where else, other than Celebrity Deathmatch, do plots have such satisfying finishes? Nowhere. This DVD Set is brand new.