The Grimleys is a warm, nostalgia-filled comedy which is a must-have for anyone who lived through the 1970s.
With a great cast and excellent scripts, you'll experience hours of laughs and memories with this DVD set.

The Grimleys follows the ups and downs of the dysfunctional Grimley family and their struggle with everyday life. Gordon Grimley, played by James Bradshaw, is an intellectual but feeble schoolboy who has a crush on his teacher, Miss Geraldine Titley, played by Amanda Holden (Samantha Janus in the pilot).

His younger brother Darren, played by Ryan Cartwright who also narrates the storyline and set the scene, although fond of Gordon and sympathetic to his unrequited love for Miss Titley, is frustrated by his brother's fey personality and nickname of 'The School Spanner'. 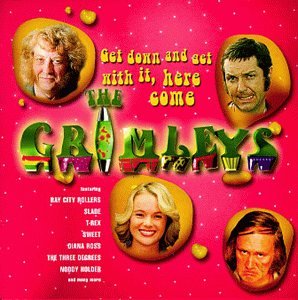 Father Baz Grimley, played by former Young Ones actor Nigel Planer, was a bone-idle British Leyland car worker, who injured his back on his first day at the Longbridge plant and went on strike on the second. He had not moved from his armchair since then and spends his days watching television. ] He is particularly infuriated by son Gordon's artistic leanings and was determined that he should do 'a man's job' rather than go to university. Hard working mum Janet Grimley was played by impressionist Jan Ravens. Other domestic characters are older sister Lisa Grimley, played by Corrieann Fletcher, and Nan, played by Barbara Keogh, who seem to be obsessed with 'The Grimley Curse'. Next door neighbours were the Titley family headed by father Reg Titley, played by Paul Angelis, who was a plumber, the aforementioned Geraldine (his niece) who worked as an English teacher at Gordon's school, and the object of his lust, and son Shane (played by Simon Lowe), a Bay City Roller lookalike and self-styled ladies man complete with a clapped out Vauxhall Viva car.

To complicate matters further, Shane was dating Lisa Grimley, and Janet Grimley and Reg Titley obviously carried a torch for one another. Reg's sensitivity and surprisingly poetic tongue gave rise to the question of Gordon Grimley's parentage, as does Shane Titley's oafish behaviour and idolisation of armchair bound slob Baz Grimley.

Many of the scenes were set in the Grimley brothers' school where we met their sadistic P.E teacher Doug "Dynamo" Digby, played by comedian Brian Conley (Jack Dee in the pilot), who lived in a corner of the school gymnasium.[7] Doug always took both pride and pleasure in bullying his pupils, and in one episode we are given a clue to the development of this behaviour when his thuggish father, played by Lewis Collins from hit 1970s crime drama 'The Professionals', visits him.

The show also starred former Slade singer Noddy Holder, who played music teacher Neville Holder (Noddy's birth name), and a number of inspired cameos including 1970s glam rock singer Alvin Stardust as a pub landlord.[8] This led to a series of clever 'in jokes' such as Noddy and Alvin be-moaning the lost opportunities of their youth over a pint of beer, and the character played by the one time glam-rocker lead singer of Slade being described as "not exactly Mr. Rock 'n' Roll".

It's key strengths were the strongly developed characters and the genuinely funny scripts, combined with a great seventies soundtrack featuring such acts as T.Rex, Suzi Quattro, 10CC and Pilot.