-
+
2 Stupid Dogs DVD Box Set
At long last, the legendary Hanna Barbera cartoon Two Stupid Dogs is available on DVD, exclusively on DVDRare.com, on a set containing every single episode of the show ever broadcast. 2 Stupid Dogs is an American animated television series created by Donovan Cook and produced by Hanna-Barbera and Turner Program Services that originally ran from September 11, 1993 to January 21, 1995 on TBS. The main segments of the show featured two dogs, "Big Dog" and "Little Dog." The big dog was voiced by Brad Garrett, and the little dog was voiced by Mark Schiff. Reruns are played on Cartoon Network's classic animation network Boomerang. The show is about a big dog and a little dog, who aren't very smart as the titles explains, and their everyday misadventures, with an animation style unusual for the time: a very flat, simplistic style similar to early Hanna-Barbera cartoons of the 1950s and 1960s, but with early 1990s humor and sensibility. In addition, the Big Dog talks much less than the Little Dog does and most of the time, the Little Dog talks about food. It also did not have a series structure, similar to many humorous cartoons and sitcoms. The show did not follow a continuous storyline what happens in one episode has little to no effect on another. 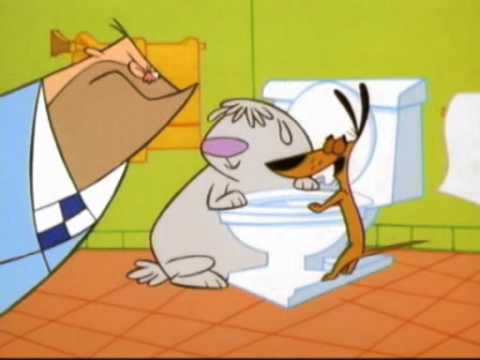